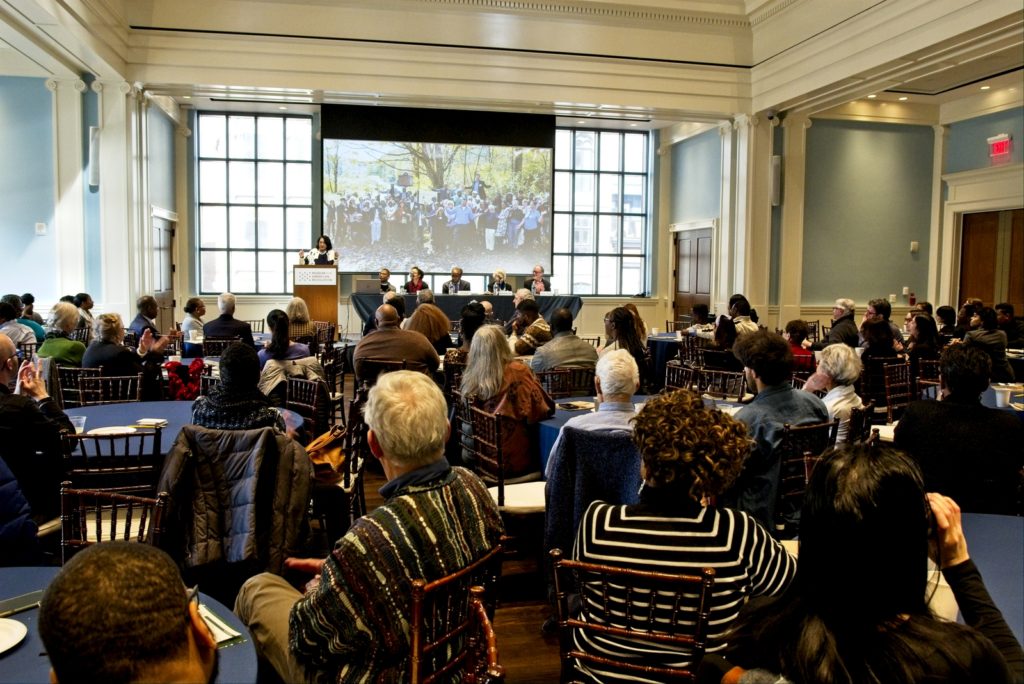 On February 8, 2020, the Museum of the American Revolution (MoAR) in Philadelphia partnered with the Dennis Farm Charitable Land Trust (DFCLT) to host the third annual Lonae A. Moore Memorial Forum, “It Begins with Each of Us: Fostering Racial Understanding.”  Among the capacity audience were students, faculty and administrators representing eleven different colleges and universities in Pennsylvania, New Jersey and Delaware.

You can watch a video of the Forum in its entirety here.

This year’s forum addressed how journalism, literature, the arts, mass media and social media shape and perpetuate our perceptions about race.  In her opening remarks, DFCLT President, Denise Dennis said, “Today’s forum will hopefully help us to better evaluate the direct and subtle ideas and messages we receive about race from our cultural resources.  If we can better evaluate the information we receive, we will understand how these ideas influence our attitudes and behavior toward others and their attitudes and behavior toward us—and from there, we can begin to better understand one another.”

The panelists led a candid, thought-provoking conversation about ideas of race as they are expressed through museums, journalism, the media, literature, and the effects of all-the-above on the criminal justice system, and offered solutions for fostering racial understanding, as we become a more diverse, global community.  A question-and-answer session with the audience followed the panel presentations.

During the forum, DFCLT paid tribute to Margaret Dennis Crumley (1930-2019), the oldest living, sixth-generation descendant of the Dennis family who passed away on December 2, 2019, and in her long career was an Equal Employment Opportunity manager, advocating on behalf of women and minorities.  Also, DFCLT introduced their 2019-20 scholarship recipient, Delaware State University senior Aniyah Bradley.

Both the Museum of the American Revolution and DFCLT are committed to telling a fuller and more inclusive history of our nation’s beginnings and to keeping the best of the United States’ ideals alive, as an inspiration for present and future generations.  The annual forum is named in honor of Lonae A. Moore (1997-2018), an eighth-generation direct descendant of the Dennis family who was a criminal justice major at Delaware State University when she tragically lost her life in a car accident.  Lonae was DFCLT’s intern, participated in the first forum, and had written a paper on the Black Lives Matter movement during her sophomore year at DSU.

Nilgun Anadolu-Okur, Ph.D., a native of Turkey, currently serves as Presidential Professor of Africology and African American Studies (DAAAS) and Director of the DAAAS undergraduate program at Temple University’s College of Liberal Arts in Philadelphia. She holds an interdisciplinary Ph.D. in African American Studies, Africology, American Studies, narrative and discourse analysis, as well as comparative theater and interdisciplinary communication. Anadolu-Okur is the chairperson of Faculty Senate Status of Women committee. She serves as an affiliated faculty at Gender, Sexuality, and Women’s Studies Program at Temple University. She is the recipient of two International Fulbright Senior Scholar awards.

Lee A. Daniels has worked as a reporter at WGBH-TV in Boston, as a reporter and editorial writer at The Washington Post, as a reporter at the New York Times, as a vice-president of publications at the National Urban League, and as the founding editor of a webzine at the NAACP Legal Defense and Educational Fund. From 2013 to 2016, he was a syndicated columnist with the National Newspaper Publishers Association and with emergenewsonline.com. Daniels has worked with Rachel Robinson on her book Jackie Robinson: An Intimate Portrait (1996); and with Vernon E. Jordan, Jr. on his collection of speeches, Make It Plain: Standing Up and Speaking Out (2008). He has written one book of nonfiction, Last Chance: The Political Threat to Black America (2008). He is an alumnus of Harvard College.

Charles A. Gallagher, Ph.D., has served as Professor of Sociology in the Department of Sociology and Criminal Justice at La Salle University since 2008. Since, 2014, he also has served as Senior Fellow, Yale Urban Ethnography Project, in Yale University’s Department of Sociology.  His areas of research and teaching include race and ethnic relations, urban sociology, immigration, and stratification and social inequality. Gallagher has written and edited numerous book and volumes, book chapters, articles, and book reviews. His current book project is entitled The Institutionalization of Colorblindness and The Rise of Racial Inequality. He has appeared on major media outlets including, NPR, CNN, FOX News and MSNBC.

Monique R. Scott, Ph.D., currently serves as Director of Museum Studies at Bryn Mawr College. She is an anthropologist with a career as both a scholar of museums and as a museum professional working within museums. After receiving her Ph.D. in Anthropology from Yale University in 2004, Scott worked for more than 10 years as head of cultural education at the American Museum of Natural History. She specializes in how diverse museum visitors make meaning of race and culture in museums, particularly representations of Africa and people of African descent, the basis for her 2007 book Rethinking Evolution in the Museum: Envisioning African Origins.

Reverend Mother Jo Ann B. Jones is Associate Rector at Church of the Redeemer in Bryn Mawr, PA, where she is responsible for adolescent and youth formation and outreach. Prior to her career in the ministry, she was an attorney.  Her professional positions included Office of Area (later Regional) Counsel of the U.S. Department of Housing and Urban Development in Philadelphia; an associate at Pohoryles and Greenstein in Washington, D.C; Philadelphia Law Department; General Counsel to the Philadelphia Housing and District of Columbia Housing Authority; and Assistant General Counsel for Drexel University. In 2007, she joined the Nutter for Mayor and later the Nutter Administration as Deputy Director, Office of Housing and Community Development. Retiring from the City of Philadelphia in 2014, Jones became a postulant in the Diocese of Pennsylvania and graduated from The General Theological Seminary in 2017.  Rev. Mother Jones is also an alumna of Swarthmore College and the University of Maryland School of Law.