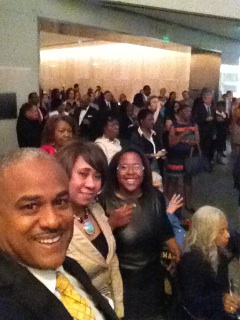 When I heard I was invited to the preview opening of Smithsonian’s National Museum of African American History and Culture’s (NMAAHC) exhibition Through the African American Lens: Selections from the Permanent Collection and that my family history was a part of the exhibition, I was excited. A lot began to run through my mind on what to expect. As the day got closer, my expectations grew bigger and bigger. Then the day, May 6th 2015, finally came. My mom, dad, brother & grandmother all tagged along to go to the opening, as well. The ride from our home in New Jersey to Washington, D.C. was extremely long. Then when we reached the city and were close to the museum, we ended up getting lost in Washington D.C. We asked people all over the place for directions, from people walking on the streets, to the police.

Then we finally arrived! The exhibition was held in the Smithsonian’s National Museum of American History and it was so nice on the outside. I didn’t think it could be any nicer until I walked in. The museum was even more beautiful inside then I thought it would be. We headed upstairs to where the exhibition was and there where thousands of people there.

When I first reached the reception, I got something to eat and the food was wonderful. Then, as soon as I could I headed over with my family to the section of the museum where the exhibition was held. I came across the first exhibit and it said, “Early Settlers: The Perkins-Dennis Family” and it had a tree of us, where it listed the names of our entire family, along with me and my brother Lonnie & my sister Fleur. We were with the last generation listed above, on the top branches of the tree. It was so exciting! I took a picture of it to save for memories. I never would have thought that my name would be in a museum. After the night was over and I looked back at everything that happened, I was so pleased that I had been invited to be a part of this wonderful evening in my family’s history!