Hope Dennis and the Institute of Race Relations, 1945 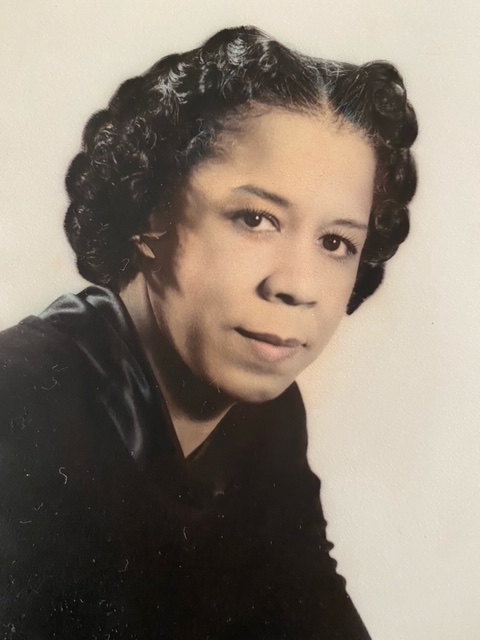 In the 1940’s, Hope Dennis (1906-2006), co-founder of the Dennis Farm Charitable Land Trust, was on the staff of Charles S. Johnson, PhD, at Fisk University’s Institute for Race Relations, in Nashville, Tennessee. Founded in 1942 and funded by the American Missionary Association and the Rosenwald Foundation, the Institute was the first think tank to be located at a predominantly black institution. Each summer, beginning in July 1944, the Institute’s attendees came from across the United States and gathered at the Institute for three weeks to “provide practical intensive study of problems associated with race while providing methods for dealing objectively with such issues.” It was considered groundbreaking, not only because it was the first such institution in the South, but because it was interracial.

Photos courtesy, the Estate of Hope Dennis.
Use the left and right arrows to proceed the slideshow, or hover over a photo to pause it.

Hope, who grew-up in Wilkes-Barre and attended “white” elementary and secondary schools, was an alumna of Bloomsburg State, Northwestern University and the University of Michigan where she earned a master’s in psychology.  A high school English teacher and guidance counselor in the Midwest, she welcomed the opportunity to work with Dr. Johnson and participate in the Institute and its objectives. 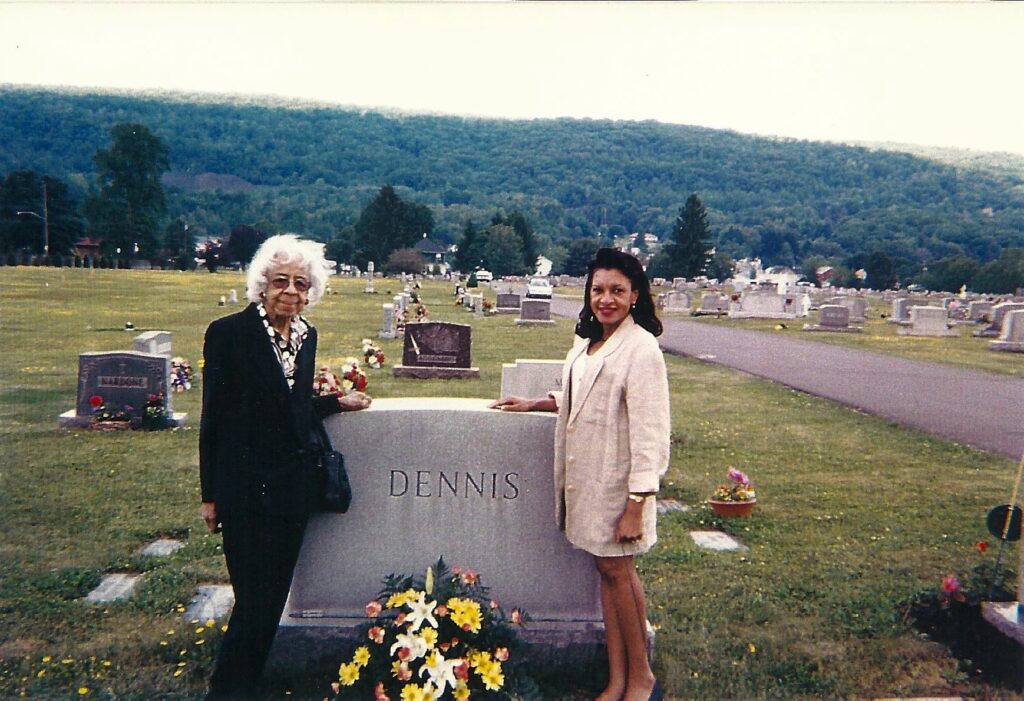 In an article published in the January 1946 edition of Education Magazine, Hope Dennis described the Institute of Race Relations in words that are as meaningful, instructive and prescient in 2021 as they were then. Hope’s typed carbon copy of the original article from 1945, as well as a typed version, is below.

For the past two years, Fisk University in Nashville, Tennessee, had been host to the American Missionary Association’s Annual Institute of Race Relations.  Unique is that it is the only venture of its kind to be undertaken in the South, the Institute represents a technique for achieving the ideals held by forthright believers in democracy everywhere and epitomized in a challenging statement in the undelivered Jefferson Day address of the late President Roosevelt: “Today we are faced with the preeminent fact that if civilization is to survive, we must cultivate the science of human relationships—the ability of all peoples of all kinds, to live together and work together in the same world at  peace.”

Membership of the Institute is drawn from all parts of the country—from the South, the North, the East and the West; from rural communities and metropolitan centers.  It includes Jew and Gentile, white and Negro, Oriental and Occidental.  It embraces alike persons of long experience in the field of human relationships, and groping beginners.  The experience and specific interests of these people are as widely disparate as their backgrounds—there are students and workers in the fields of religion, education, social welfare, labor, industry, and government.  Some come equipped with little more than an uninformed interest in the complex problem of race relations, but with an eagerness to learn, and a deep desire to share in the drafting and development of a new and better pattern for human living.  Some come already fired with zeal and courageous wisdom, but wanting the experience of common fellowship—the spirit of togetherness, which is not the least of the values which accrue from living and working with others. 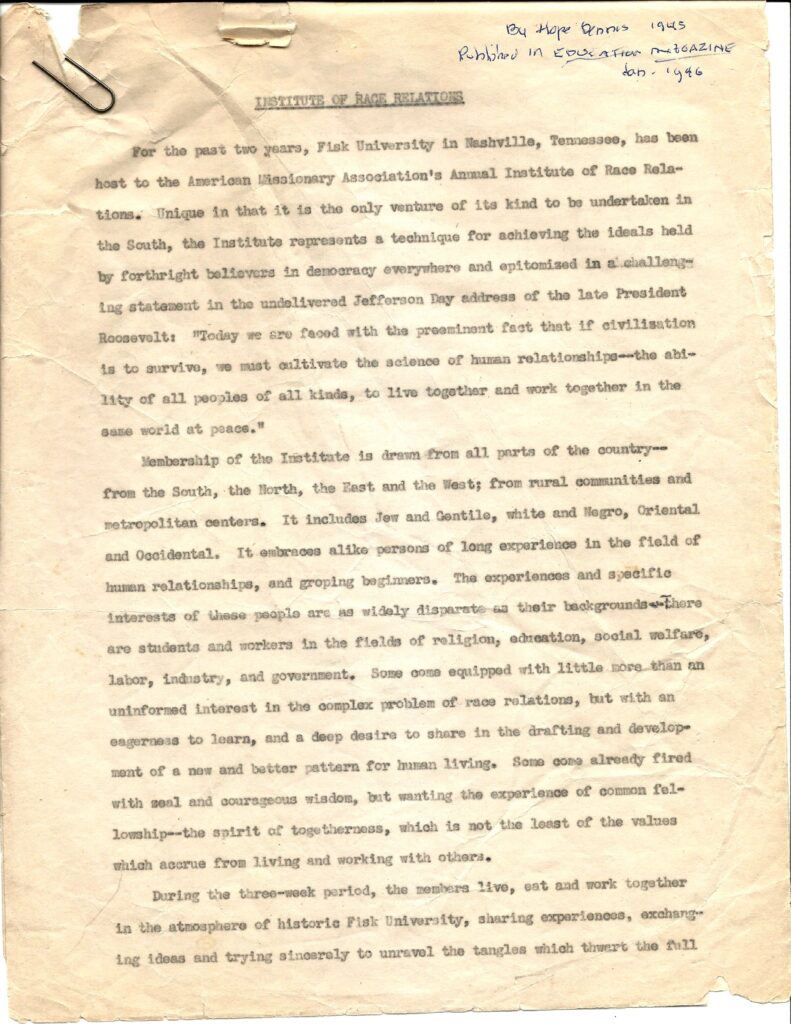 During the three-week period, the members live, set and work together in the atmosphere of historic Fisk University, sharing experiences, exchanging ideas and trying sincerely to unravel the tangles which thwart the full realization of “One World.”  For many, the Institute represents the first experience in close contact with members of other racial groups; for all, it point the way to clarifying vision, new evaluations, broader understandings, and deeper insights into the delicate problems of relationships between races.

Consistent with the knowledge that much confusion of purpose and action stems from the failure to realize that the problem of race relations is a national rather than a sectional one, and that it can be neither viewed nor treated as an isolated entity but only as it falls within the broader context of religion, education, employment, government policy and the general social welfare.

A distinguished group of specialists in the fields of anthropology, education, government administration, law, religion, labor and management, social work, sociology, psychology, and other related areas, provide the leadership of the Institute.  The program of study covers a preliminary period of orientation and background material, and subsequent inquiry into more practical aspects of present day race relations, with a view to evaluating and renovating techniques already in use, and developing new strategies for attacking problems as they arise.

The role of federal agencies in determining a national racial policy; the problem of labor and employment, housing, and community services; the press and its function in race relations; southern economy; and the role and status of education, are all treated in lectures, panel discussions, and separate seminars.  Special evening meeting are arranged in order that the benefits of the Institute may be shared in by the general community.

Carefully planned clinics provide opportunity for individuals and small groups with specific interests and problems to profit from the expert knowledge and broad experience of the Institute leaders who serve as consultants and resource persons in their specialized areas.