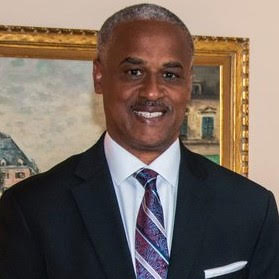 Lonnie H. Moore, III, Vice President of Marketing for The Dennis Farm Charitable Land Trust (DFCLT), is a seventh-generation direct descendant of Prince Perkins who first settled the Dennis Farm and the great-great grandson of Henry and Angeline Perkins Dennis who expanded the farm. Born and educated in Philadelphia, Moore is an alumnus of Morgan State University, in Baltimore, MD, where he majored in Business Administration.

At Morgan State University, Moore became a member of Kappa Alpha Psi Fraternity, Incorporated’s Alpha Iota Chapter. Today he is a member of Kappa’s Philadelphia Alumni Chapter where he serves on the Board of Directors of their Achievement Academy, mentoring to young men.

Lonnie H. Moore, III lives with his loving wife of twenty-three years, Shante, and is a proud father and grandfather.