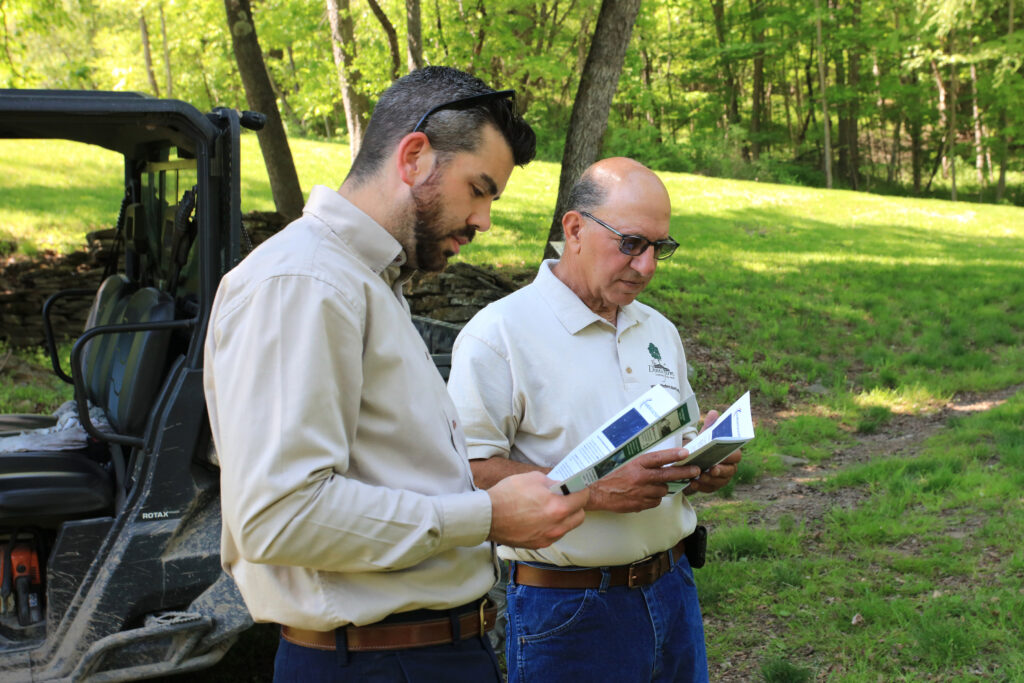 With a 153-acre property and an educational, historical and conservation mission, the Dennis Farm Charitable Land Trust could not function without a team of highly committed and hard-working individuals who have a passion for what they do.  Two of the most committed and treasured members of Team Dennis Farm are Property Manager, John V. Arnone of Kingsley, PA, and DFCLT-Keystone College Liaison, Lucas Taylor of La Plume, PA.  For the past fifteen years, Arnone and Taylor have been dedicated to the Dennis Farm and its mission.  Without them, DFCLT could not have accomplished our goals thus far; they are our team on the scene.

When visitors arrive at the Dennis Farm, they are dazzled by its natural beauty, but have no idea of what it takes to maintain the green lawns, the road beneath the hemlock trees, and the serene cemetery.  Property Manager, John Arnone, is the man behind all of this, having masterfully restored the grounds of the Dennis Farm, transforming them from an overgrown tangle of scrub trees and vines to the beautiful landscape it was during the years when the family still lived or spent summers there.  John cleared the land around the house to reveal the sweeping lawn and apple orchard; reclaimed and fortified the old road that runs three-quarters of a mile between the farm’s lower and upper tiers, so that it is navigable for vehicles; has identified problems when they appear, and given the property daily care and security.  Indeed, John cares for the Dennis Farm as if it is his own.

John keeps in touch with Denise Dennis and Team Dennis Farm with updates, and advises them on the lay of the land and the house.  For example, when blighted ash trees needed to be cut, when tree stumps needed to be removed, and when the stream running downhill overflowed, plummeting rocks that ripped a long gash in the grounds, John called and informed Denise immediately.  Although he does most the work on the property himself, when a job requires additional help, John screens local businesses and recommends the best one to DFCLT.  Most recently, John advised DFCLT on the stonemason who constructed the stone bridge at the entrance to the farm (the old one had collapsed) and reinforced the well, and the builder who constructed a split-rail fence around the foundation and reconstructed the springhouse roof on the original hillside homestead.  He also knows and shares the history of the farm with visitors.  Dennis family descendants, Denise, Darryl Gore and Lonnie Moore and DFCLT place their trust in John Arnone, knowing that with him on the scene, the Dennis Farm will continue to thrive as a historical site and a place of beauty.

Education has been crucial to DFCLT’s mission from the beginning.  The founders believed that, if they were going to preserve the farm as a historical site, they also had to make sure to educate the public about why the site is significance.  Keystone College has been key in helping DFCLT achieve its educational mission and Lucas Taylor, director of student activities and multicultural affairs at Keystone College and the DFCLT-Keystone College Liaison, has been invaluable in maintaining the connection between the two institutions.  Each year, Lucas selects, organizes and trains students from Keystone College to be docents at the Dennis Farm.  Under his tutelage, the students give well-informed guided tours to guests who visit the property.  In the training process, Lucas teaches the students the history of the farm and what makes it a unique historical site.  In the off-season, when students aren’t present, Lucas has given guided tours of the Farm to select guests.  His office is also the contact for anyone who would like to schedule a tour of the farm, through the Dennis Farm at Keystone College’s phone line.  As DFCLT’s liaison with Keystone College, Lucas is also involved with the Trust’s annual October symposium, which includes a program and luncheon at the college and a tour of the farm.  He has also represented DFCLT with Team Dennis Farm at the Pennsylvania Farm Show in Harrisburg, at the Nicholson Bridge Centennial, and at the unveiling of the Susquehanna County Heritage Attractions Sign, which features the Dennis Farm, in Montrose.  An ordained minister, Taylor is a pastor of the Universalist Church in Brooklyn, PA, not far from the Dennis Farm.  Thanks to Lucas Taylor’s belief in and dedication to our mission, DFCLT has been able to share the history of the farm with young people and thus, broaden their understanding of American History.