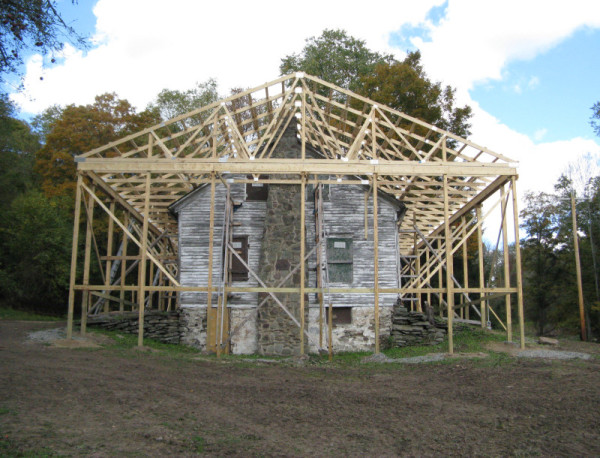 The fragile farm house was originally built, circa 1820-1830, and renovated for use as a summer home in 1939. The structure, a classic New England, timber-frame house was severely weakened from lack of use and vandalism over more than three decades. Recent hurricanes collapsed the roof and caved the north wall inward, further undermining the structure. Last year, the contractors temporarily stabilized the house with buttresses and braces. Retrieving intact materials and artifacts from the debris beneath the collapsed roof, while supporting the structure was a complex undertaking. Nonetheless, the team achieved their objectives. “The project provided insights into the original construction of the DFH,” said Yocum, “as well as a better understanding of the 1939 renovations.”

After removing and storing the north wall, interior debris was removed through the remaining aperture. Deteriorated building material was carefully photographed and documented before, during and after removal.

“A large quantity of sound architectural fabric was salvaged, inventoried, and stored for future study,” Yocum explained. “During the restoration phase much of this material will be reinstalled or will serve as patterns for architectural elements to be replaced.” Even the redbrick chimney in the northwest (kitchen) corner was dismantled, inventoried and stored. The second-floor north, east and west exterior walls and all second-floor windows were removed, inventoried and stored, as well. The final phase of the stabilization process involved construction of an elaborate, pole-barn superstructure to support the house.

According to Yocum, work on the project revealed that the original timber-frame structure was a mixture of older hand-hewn and later hand (or pit) sawn timbers. “It is possible that the hand-hewn timbers may have been salvaged from an earlier structure for use in the building’s construction,” he said. “It was not unusual, particularly in rural regions, for structures to be constructed with a mix of older and newer materials.”
Based on classic, timber-frame construction and similar buildings in the region, the farm house is believed to have had an original center-pile chimney. During the 1939 renovation, the chimney was probably removed and replaced with the center, foyer stairway. The team found possible evidence of the earlier chimney on the basement floor.”

During the next phase of the project, Phil Yocum and his colleagues at John Milner Associates will pursue additional research to expand their knowledge of the building’s evolution, in preparation for a Historic Structures Report. “This research,” Yocum explained, “combined with investigation of similar houses in the area, should allow us to better understand the original construction and subsequent evolution of the Dennis Farm House.” 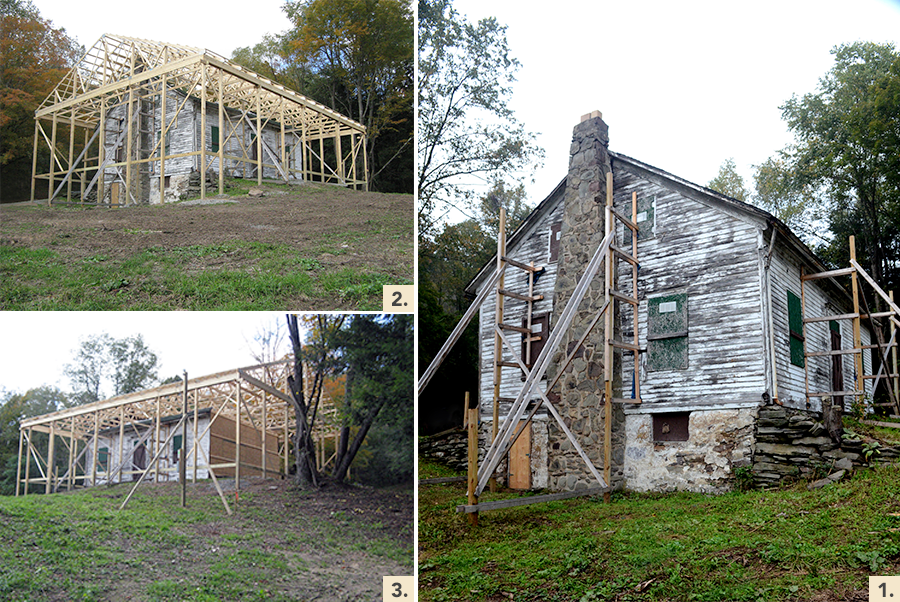