FUNDRAISING GOALS: We are raising $10 million for two building projects, the restoration of the 19th century farmhouse for reuse as a museum, the construction of an Interpretive Center, and landscaping.

Restoration and Reconstruction of the Nineteenth Century Farmhouse

Through a grant from the Pennsylvania Historical and Museum Commission (PHMC), DFCLT has recently completed a Historic Structures Report on the nineteenth century farmhouse (built circa 1825) on the site. With this report, we are currently raising money for the restoration and reconstruction of the fragile farmhouse for reuse as a museum. Visitors will have an opportunity to tour permanent exhibitions in the house, including vintage photographs, 19th century family artifacts, a Perkins-Dennis Family Tree similar to the Perkins-Dennis Family Family Tree in the exhibit about the family in the Smithsonian’s exhibition, Through the African American Lens; and a timeline of the generations of the Dennis Family within the context of the historical times in which they lived. 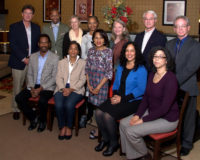 In 2015, heritage and museum planning professionals toured the farm and, at a planning meeting, shared their expertise for the development of an Interpretive Plan for the Dennis Farm.

In 2015, DFCLT received the Chairman’s Award from the National Endowment for the Humanities to host a meeting of heritage planning professionals from across the county to advise and make recommendations about how to best interpret the farm to the public. Thanks to a grant from Pennsylvania’s Department of Conservation and Natural Resources (DCNR) through our partnership with the Endless Mountains Heritage Region, we followed through on those recommendations and hired a professional team from The Commonwealth Heritage Group who, in 2017, completed an Interpretive Plan for the entire 153-acre Dennis Farm in order to maximize the farm’s importance as a heritage, environmental and educational destination. The plan includes a detailed blueprint for the transformation of the farmhouse to a museum.

Research Facility: The DFIC’s digital library will be the repository of literature and documentation about free African Americans who, like the Dennis family, lived in the North during the colonial period and between the end of the American Revolution and the Civil War. There is currently no one location where this information can be found, as it is a fairly new area of research.

Introduction to the Farm: The Interpretive Center will be the place where visitors learn the story and significance of the farm before they begin their tour of the site.

Public Events: We will, also, hold programs and special events, like our annual symposium, in the Interpretive Center. Among the special events and in keeping with the farm’s extraordinary history, we plan to include programs that address best practices in bridging the racial divide.

The Grounds: The Interpretive Plan details how we can facilitate tours of the farm by:

Our plans include planting a garden with samples of crops that were grown on the farm in the 19th century, based on the farm’s 19th century agricultural census records. Since, according to the 19th century agricultural census, orchard products and maple syrup were among the farm’s major products, we will plant new trees in the apple orchard and maple tree grove. Landscaping will also include a flower garden based on vintage photographs of the farm.

Photo right: Landscape Architecture students from Pennsylvania State University, University Park on a field trip to the farm in 2013.

We plan to continue to develop educational programs on subjects related to the farm, from History to the Environment.

Education is central to the Dennis Farm Charitable Land Trust’s mission. We have an ongoing partnership with Keystone College in La Plume, PA, which is near the farm. Trained student docents from Keystone give tours of the farm to our visitors, Keystone College hosts our annual symposium program and luncheon, after which attendees who come from the local community, across the Commonwealth, and out-of-state tour the farm, and the college has hosted two Dennis Farm Exhibitions.

In 2018, we will host a summer concert on the lawn of the farm, as part of Keystone College’s 150th anniversary celebration. We are also developing educational programs with the college.

The farm offers infinite educational opportunities. For example, we would like to work with a university on identifying the species thriving in the wetlands on the farm and to identify and catalogue the variety of wildflowers in the farm’s copious fields.