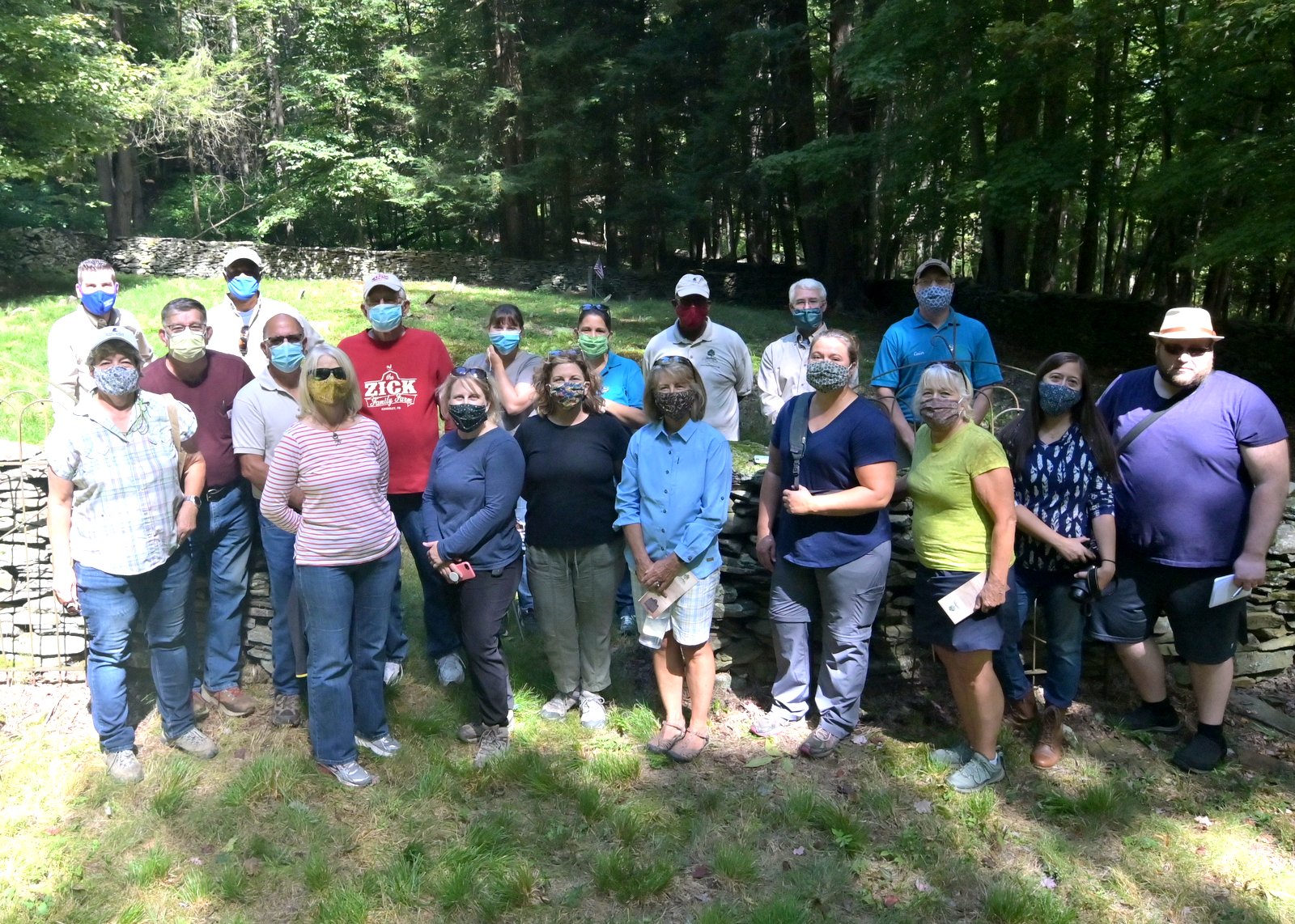 Story and photos by Rick Hiduk

Highlights included the early 19th-century farmhouse, remnants of the barn foundation and other outbuildings, the sacred Perkins-Dennis cemetery, new interpretive signage, and the archaeological site of the original Prince Perkins homestead. Direct Dennis-Perkins descendants Daryl Gore and Lonnie Moore III were on hand to provide tidbits of family history as it pertained to the site, as well as their personal recollections of visiting the homestead during their own lifetimes.

The farm has been in the Dennis-Perkins family since the early 1800s, while its first owner, Revolutionary War veteran Prince Perkins of Connecticut had been in the county since 1793. The property was actively farmed into the 1940s and remained a cherished getaway for the family, many of whom moved on to Wilkes-Barre and Philadelphia. It is the goal of the Dennis Farm Charitable Land Trust to continue renovations to the site, including restoring the 19th century house into a museum and meeting center.

Among the preregistered participants on Sept. 4 were serious history buffs, members of other organizations that preserve and promote greenspaces and trails, and Jessica Yoder of the Pike County Farmland Preservation. It was a work day for her, as she studied how the preservation and renovation of the Dennis Farm had progressed in comparison to projects on which she is working. She was also appreciative that the limited participation for the hike provided safe distancing to address pandemic-associated concerns.

Patty Button of Kingsley is a trustee for the Brooklyn Historical Society and often hikes Creek Road past the entrance to the Dennis Farm. “I’ve heard a lot about it, but I’ve never been on the property,” she related. So she and Jeffery Mead of South Montrose hiked first from Button’s Kingsley home before they partook in Friday’s walk. Both also have family histories in Susquehanna County that reach back to the early 1800s.

Chamberlin, who also serves as executive director of the Endless Mountains Heritage Region (EMHR) provided opening remarks and introductions. The EMHR has been a strong supporter of the Dennis Farm project, leveraging numerous DCNR grants to cover a variety of projects on the site, most recently new interpretive signs and the preservation of the original Perkins homestead foundation.

“The EMHR was thrilled to host the first mobile workshop of the Eastern PA Greenways and Trails Summit,” Chamberlin commented after the hike. “As members of the summit’s planning committee, we wanted to incorporate some diversity and history into this month-long event.”

Taylor, who is the pastor at the First Universalist Church of Brooklyn and the director of student activities at Keystone College said that the 10 new signs, which have old photos that directly relate to what the visitor is physically viewing, have been a great asset to the operation.

In addition to towering trees, including maples that are once again producing syrup after a 90-year hiatus, and the hemlocks that provide shade for the trail up the hill, the Dennis Farm’s stone walls are a popular feature among guests. Catts suggested that they were used to support tier farming on a hillside that others might have deemed unfarmable, but he doesn’t know how old they are. “I’m waiting for the science that tells us which walls came first,” he stated.

Another mystery that DFCLT members would love to solve and about which visitors always ask is what role, if any, the Dennis Farm played in the Underground Railroad. That discussion was renewed on Friday when Catts, standing next to the original homestead foundation, pondered whether the old house’s isolation so high above the main road below might have provided sanctuary for runaway slaves after the Dennises moved to the bottom of the hill.

Gore explained to participants that the DFCLT stands to garner a $400,000 grant from the National Endowment for the Humanities, but it requires a $1.2-million match. The funds would put the renovation of the 1800s farm house on the fast track so that the museum there could be open by 2026, in time for the nation’s 250th birthday.

Chamberlin expressed gratitude to the Dennis family, the Pennsylvania Environmental Council and Keystone College for their hospitality and for providing lunch for participants. “It was a wonderful event, and everyone enjoyed hiking the trails throughout the 153-acre property.” he remarked. “It was also a great opportunity to check out some of the projects that the EMHR has helped fund.”

For a full list of mobile and virtual workshops underway this month with the Eastern PA Greenways and Trails Committee, interested readers can log on to www.pecpa.org/2020EPGTS.