The First Universalist Church in Brooklyn Township, Pennsylvania was the setting for the annual meeting of the Dennis Farm Charitable Land Trust’s neighbors, the Brooklyn Historical Society (BHS), on July 18, 2021.  Denise Dennis was guest speaker at the meeting and updated BHS members on the DFCLT’s recent initiatives and accomplishments.

Darryl Gore and Lonnie Moore, Vice Presidents of Development and Marketing respectively, also represented DFCLT at the meeting.  The highlight of DFCLT’s presentation was a special preview of the video, produced by the Pennsylvania Commission for the United States Semiquincentennial (America250PA), about the Dennis Farm’s role in Pennsylvania’s 2026 celebration of the United States’ 250th anniversary.

This was not the first time Denise Dennis had spoken at a BHS meeting.  In the early 2000s, BHS invited her to speak at the annual meeting to introduce DFCLT to the members and outline the organization’s goals.  At one of those meetings, Denise brought a Dennis Farm guest book from the 1940s, and several BHS members looked through it and recognized the names of their family members who had visited the Dennis Family and left their signatures.  Member Barbara Kelly shared her childhood memories of the Dennis Family. 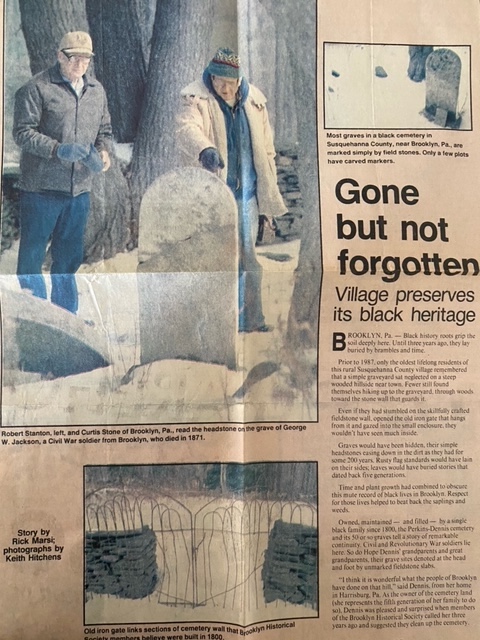 Photo of an article from 1990, featuring the late Robert Stanton and Curtis Stone at the Perkins-Dennis Cemetery

Dennis Family ancestors arrived in the region more than 200 years ago, when Brooklyn was still called Waterford Township, and the Brooklyn Historical Society has been a friend of the Dennis Farm for decades.

In 1987, the year of Brooklyn Township’s Bicentennial, BHS contacted Hope Dennis and offered to repair the stonewall around the perimeter of the Perkins-Dennis Cemetery on the Farm.

In addition to repairing the walls, BHS members, including Friend of the Farm, Dave Palmer, cleared and removed fallen trees from the cemetery, in recognition of the cemetery’s significance in the Brooklyn’s history.

Over the years, BHS past Presidents Paul Gere who with his wife Mary, remains a friend of the farm, and the late Robert Stanton and Curtis Stone corresponded with Hope Dennis.

After Hope passed away, Curtis Stone and Paul Gere continued their relationship with the Dennis Family by corresponding with Denise.

Curtis Stone attended every Dennis Farm Symposium until he passed away this year.

In 2006, BHS member Richard Zick hosted a meeting at his home in Kingsley, where Denise outlined DFCLT’s plans for the future.

The Dennis Family’s friendship with the Zick Family dates back 100 years.

Indeed, Richard Zick’s uncle Adam, grazed cattle on the Dennis Farm in the 1940s and 50s.

During the 2006 meeting at the Zick home, DFCLT met the person who is now the indispensable land manager for the Dennis Farm, John Arnone of Kingsley.

The Brooklyn Historical Society has also made a generous contribution to DFCLT’s capital campaign to transform the farmhouse to a museum, and continues to be a valued friend of the Dennis Farm with whom we have a shared history.